I traveled to Vietnam in December 2016 with Ralph Velasco's Photo Enrichment Adventures tour. I kept a diary along the way. This is Part Two of the blog post of the diary that includes the second week of the trip with some photos. See Part One which covers the first week of the trip 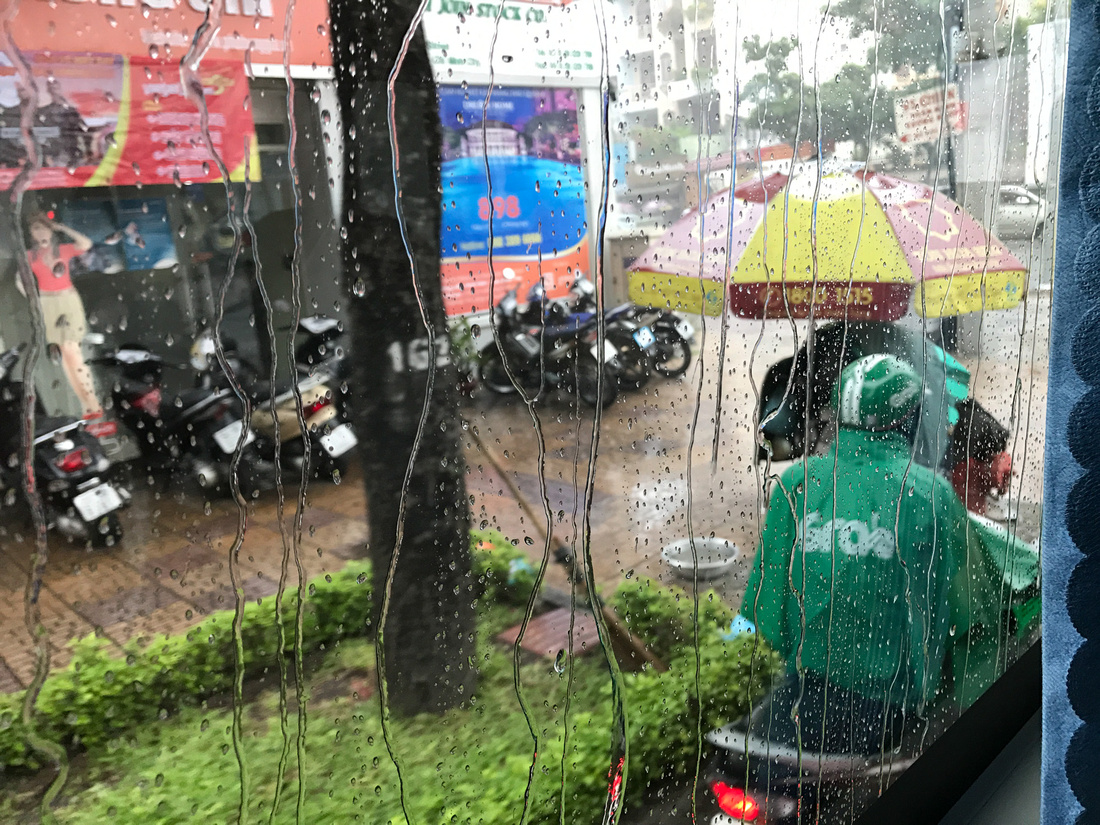 After a wonderful time in Hoi An it was off to the airport for our flight to Ho Ch Min City, also known as Saigon. Here we were greeted by our local guide, Tiger, a young man who told us about the city, local culture and the many sites to see in Saigon. 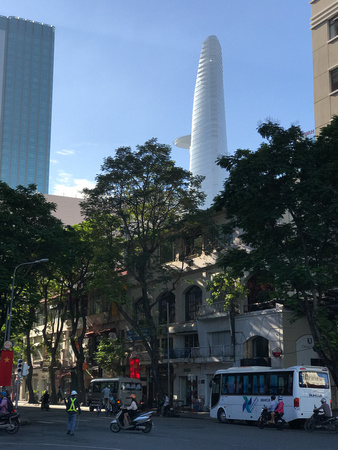 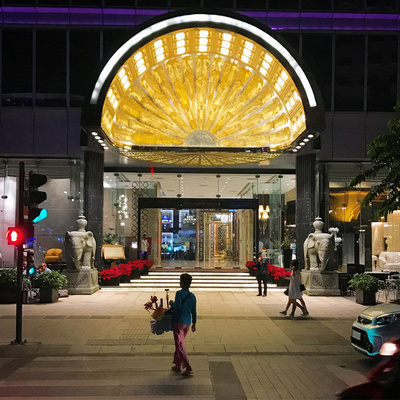 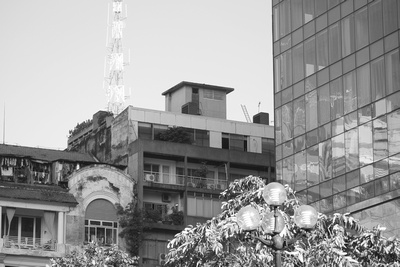 Saigon RooftopThe building that helicopters evacuated CIA personnel at the end of the war in 1975, made famous by the photo taken by Hubert Van Es 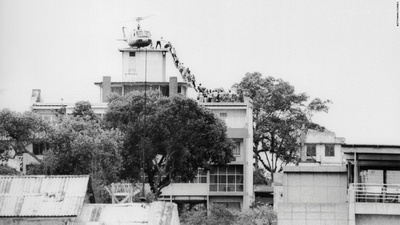 Days 10 & 11: With so many sites to see in Saigon, Tiger led us on a walking tour of District 1 which is essentially the hub of the city. First site that he showed us was the building in which the CIA occupied during the war which famously was photographed as evacuees boarded a helicopter on the roof (to be taken over to the nearly American embassy).

The Notre Dame cathedral built by the French, and the Post Office (designed by Gustaf Eiffel). Our bus drove around the former American Embassy (now the Consulate, as the current embassy was moved to Hanoi), then on to the War Artifacts Museum which is all about the 'American War' but mostly black and white photographs of Agent Orange victims. It was worth the visit and quite eye-opening.
Saigon is an enormous city. Modern and bustling, but still with the thousands of ubiquitous scooters clogging the roads and clogging the sidewalks where they are parked. 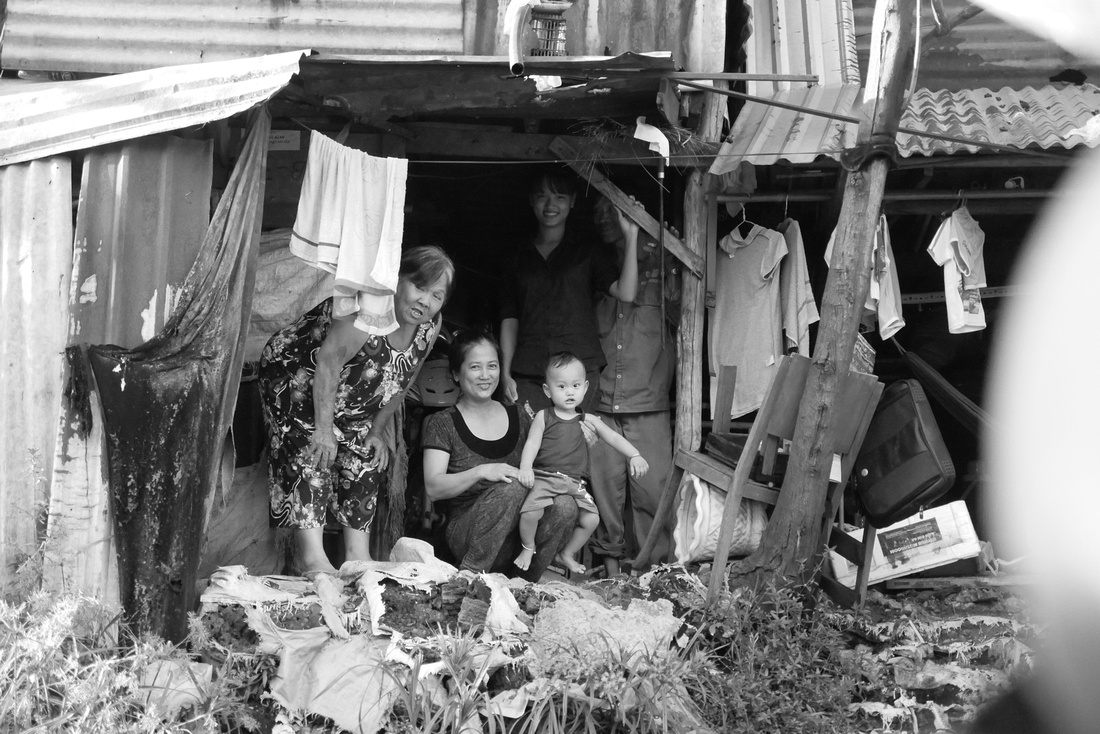 We took a boat ride on the main canal in the city and saw slums that were shocking and depressing. I photographed in black and white the entire day, as an exercise of creativity with the camera but also in homage to the war photographers of 50 years ago who had Plus X and Tri X as their medium.
We stopped in at the Caravelle Hotel in Saigon for a cocktail on the rooftop bar. News correspondents stayed there during the war. 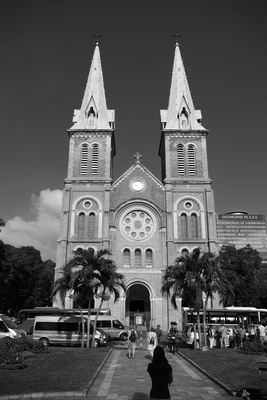 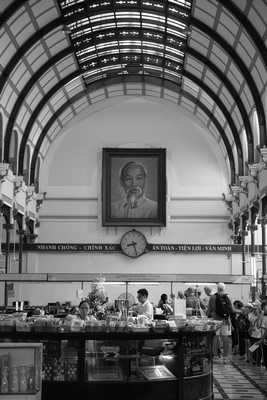 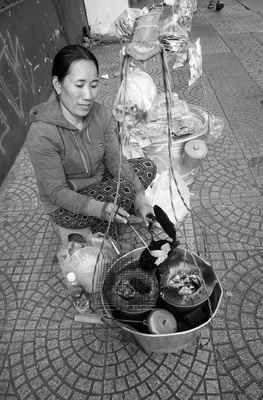 The next day we continued our exploration of the city by visiting Chou Loon Market, a neighborhood of Chinese merchants selling spices and all sorts of fresh and packaged goods. Lots of opportunities for photos. We also stopped in at the Thien Hau temple which had giant urns of burning incense. 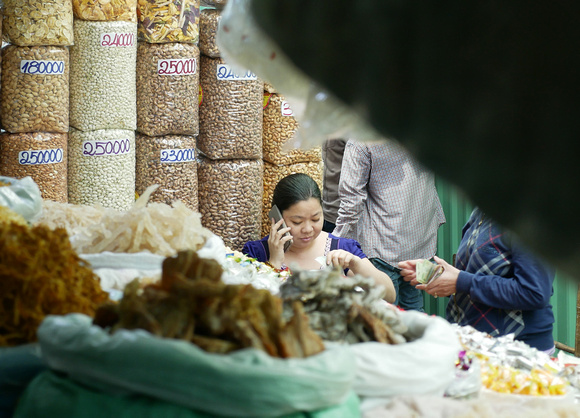 We are off to Can Tho by bus, a couple hours to the south in the heart of the Mekong River Delta. Along the way we took a boat ride for lunch and checked out a market in Cái Bè. On to Can Tho, a touristy town with casinos, restaurants and river boats for dinner cruises. We rested and went to bed early in preparation for an early morning excursion. 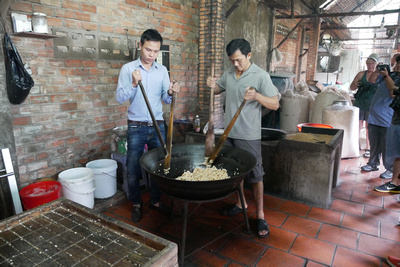 Rice Cake MakersFactory tour for tourists to see how food items are made. 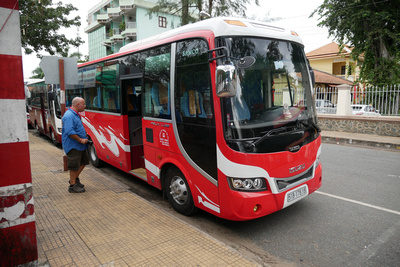 Tour BusOur 26 passenger busses were great, as ten of us each had our own windows.

Day 13:
Just before sunrise we walked to a river boat to head for the Cai Rang floating market, one of the most famous floating markets in the Mekong Delta. 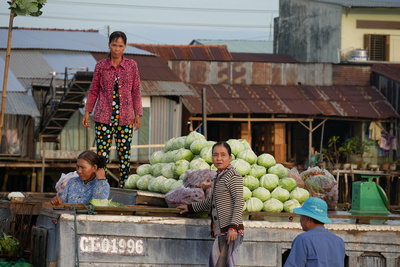 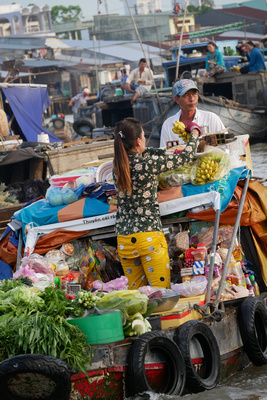 Floating BodegaThis couple had a small boated displaying a great variety of items that you would typically see at a small supermarket. Everything is for sale. 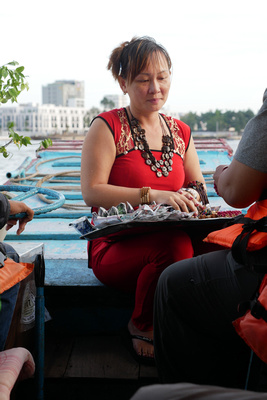 A Life on the WaterWife of boat owner who transported vistors to the Cai Rang Floating Market. This woman offered custom finger and toe nail painting also sold quite nice locally made jewelry at very affordable prices. 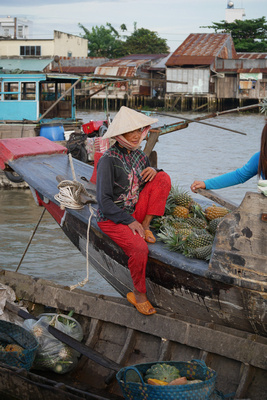 "The vendors here specialize in selling fruits and agricultural products from the whole region. During the early morning market hours, larger sized boats anchor and create lanes that smaller boats weave in and out of. The waterway becomes a maze of hundreds of boats packed with mangos, bananas, papayas, pineapples, and even smuggled goods like cigarettes. Sellers don’t have to cry out to let passers-by know about their goods because what they sell can be seen from a distance, and their cries would not be heard in the vastness of the river anyway, especially with the noise of boat engines. Instead sellers tie their goods to a tall pole so that buyers can see from a distance what they specialize in. Small boats that sell beer, wine, coffee and soft drinks maneuver among the other boats to serve market-goers and visitors alike."  - description courtesy of Photo Enrichment Adventures http://photoenrichment.com/ 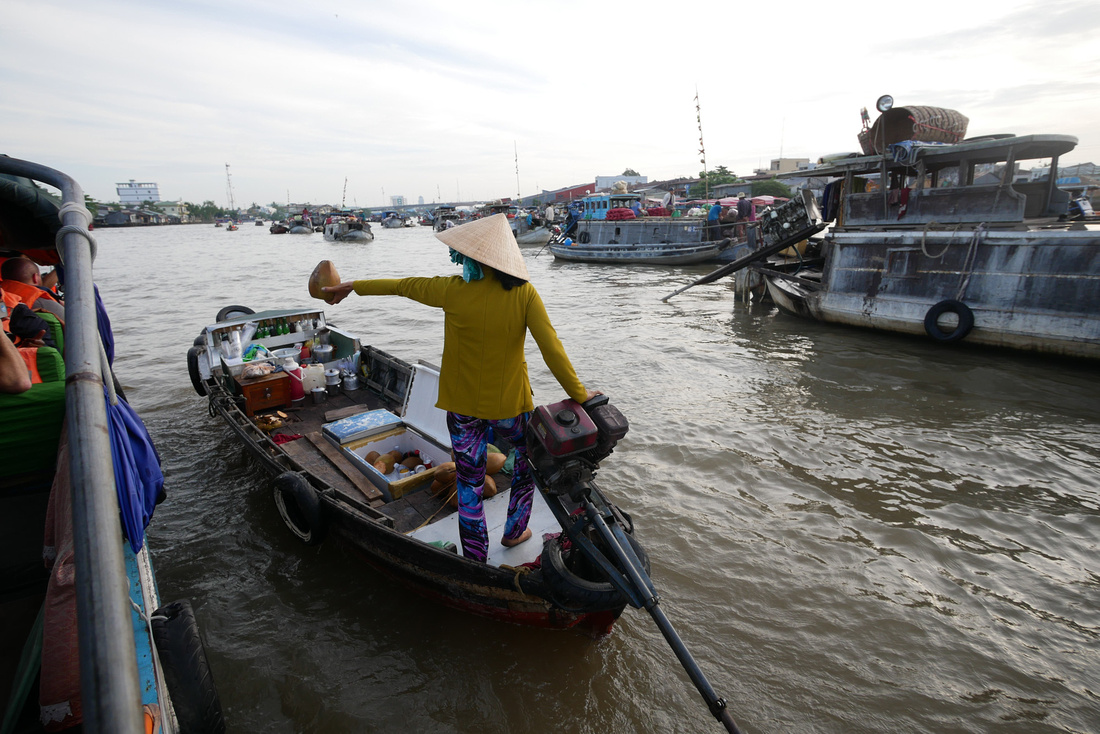 I captured a lot of 4K video that I hope to have edited and shared soon. It was definitely one of the best sites to photograph of the entire trip. It was back to Saigon for a gathering to share some photos with each other as Ralph shared some critique comments with the images projected on a screen, then a farewell dinner with the group.

Day 14: Departure day. My flight was via Cathay Pacific airline to Hong Kong where I spent 8 hours in the airport there (the airline club was very comfortable) then on to JFK via Vancouver. A very comfortable and non-eventful flight. Gotta love Business Class. The end of a wonderful trip that really opened my eyes to a wonderful country and an exotic part of the world. I hope to return soon.

Thank you for stopping by to look at my pictures. I'm editing some 4K video and will share that content soon.  Also, look for my blog post, 10 Things I learned about Vietnam that surprised me or otherwise didn't know, coming soon.