Thank you for your patience while we retrieve your images.

Created 22-Aug-12
28 photos, 3 videos
At one end of the Freedom Trail in Boston, Massachusetts, the USS Constitution is docked as a floating museum, a star attraction for locals and visitors alike. But she is also the oldest commissioned vessel in the United States Navy's fleet. Each year, the ship is towed out for a "turnaround cruise" and returned to be berthed in the opposite direction to ensure that she weathers evenly. On this day, August 19, 2012, she was towed out into the open Boston Harbor, set at full sail and fired a 21 cannon salute in celebration of the 200 year anniversary of the victory at sea of the battle against HMS Guerriere, which earned her the nickname "Old Ironsides".
Huzzah is an old English exclamation, similar to 'hooray', that could be heard loudly chanted by the reenactors in full period costume as well as the Navy crew drilling and chanting in preparation for boarding the vessel for the harbor sailing.
A moderate crowd was on hand on this morning, including a husband and wife whose daughter was on board the USS Constitution as one of the hand picked Navy crew, and who can be seen in this video waving to her parents. Standing next to the parents, and seeing how very proud they were of her daughter, made me feel equally proud to be an American in a moment I will not forget for a very long time. 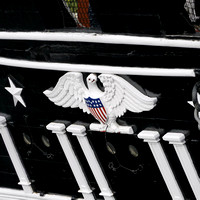